The consumption of alcohol (ETOH) has become a regular factor of American life. Whether it’s drinking a nice cold beer after a long day’s work, socializing with friends over wine and cheese or the customary blow out for one’s 21st birthday. The fact is, alcohol consumption is associated with relaxing and fun.

I’m sure you’ve heard you shouldn’t drink your calories and it sounds silly for me to say, but that includes alcoholic beverages as well. I’ve become so dependent on nutrition fact labels that if it’s there, I can’t help but look. However, how many of you know what the recommended consumption of wine and liquor is? When you’re out with friends are you counting the amount of calories and/or sugar content? No, you’re out to have a good time.

I have to admit my nutrition interest has seeped into other realms of my life. Last Wednesday I was out with my friend chilling at the local bar and she kept asking me why I wasn’t drinking the beer, saying she wished she knew I didn’t like Coors Light. I was too embarrassed to tell her, especially as a non nutrition major, that I couldn’t help, but wonder how many calories and grams of sugar I consuming with the beer and Long Island Iced Tea she ordered. Of course, I could’ve pulled that info up on my iPhone, but part of me didn’t want to know at the time.

I recently heard one should allot 10% of their calories to whatever pleasures they want. So, if one’s on a 2000 calorie diet, allotting 200 calories to whatever treats is allowed. I should be consuming around 1600 calories so the number of discretionary calories for me is less than 200 calories, however, without even looking up the nutrition facts I knew I’d be over my recommended caloric intake if I drank all the beer.

Different liquors have varying alcohol content. In fact, many light beers have almost as much alcohol as regular beer – about 85% as much.

I don’t value beer or alcohol as highly as my fellow college students. I would rather spend my discretionary calories on sweets. Yes, I know alcohol’s a form of sugar. For the future and to be more aware of my surroundings, I’ve created a cheat sheet of customary alcoholic beverages, how much one REALLY is consuming. These numbers might make you think again when ordering your next drink. How many of you only have one? It’s hard, right?

I really like this chart and breakdown on different wines. 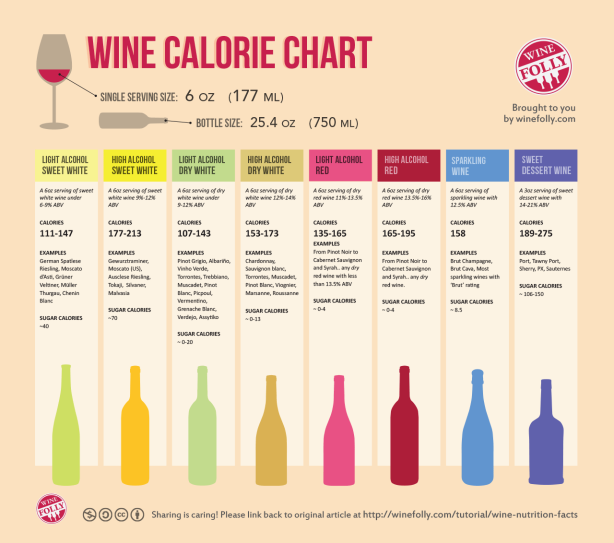 Last, but not least, a little alcohol’s fine in moderation. What’s moderation? A standard drink’s considered on that contains 0.6 fluid ounces of pure alcohol, which is equivalent to: 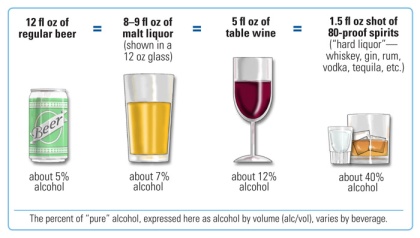 Overconsumption of alcoholic drinks can cause nutritional risk and lifelong damage to one’s liver.

Impact of alcohol on one’s life: