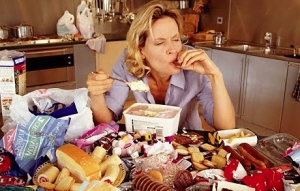 There’s an ongoing controversy if one can actually be addicted to food.  It sounds crazy right? People associate addiction with drugs or alcohol, but food?

In a recent journal article, Dr. Nora Volkow explained, food addiction is as real as drug or alcohol addiction. Both addictions impact the same neuronal mechanisms, decreasing D2 levels and the ability to resist temptation.  Brain dopamine pathways play a crucial role in the development of obesity as well as addiction, of any kind. Like drugs, sugary and fatty food activates the dopamine reward circuit and can create an addictive need of less nutrient dense foods.  Obese individuals have an increased activation in the reward and motivation circuits compared to healthy weight individuals.

Those skeptical of the role food addiction plays in the obesity epidemic believe more research is needed to better explain food as an addiction.  With a quantitative measure of the features of food versus drug addiction, there is only partial overlap.  But, that is like comparing a lemon and an orange.  Although they have a different external composition, they’re both classified as citrus fruits.  Same for drug and food addiction.  Externally, there appears to be limited similarities, but with a closer look, the brain’s response to either addiction is more similar than different.

Critics state one can’t be addicted to food as people don’t demonstrate conventional addictive qualities.1 Nonetheless, about 20% of those that do drugs are reported to be addicted, while 2/3 of Americans have trouble controlling their energy intake. 1 Another researcher, Ziuddeen argues people are set up to be obese since unhealthier foods are more in line with the lower SES income.  However, one has to look at overall picture. Why are unhealthier foods are more likely to be consumed? Does the composition of the food have addictive qualities? More than likely, yes.

It’s a harder addiction to help treat as one does not need drugs or alcohol to survive, but we need to eat food on a regular basis so there’s no “cleansing” of food out of our system to decrease the addiction. Food addiction should be taken seriously and treatment needs to be part of curbing obesity epidemic.