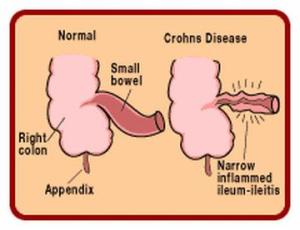 I’ve talked about other gastrointestinal (GI) diseases before and the potential benefits of being on a Gluten Free diet or FODMAPS. However, I don’t want to be mistaken for writing as if these GI issues are somehow not worth noting the disparities.

I wanted to write about Crohn’s Disease as A) of all the GI diseases I’m least familiar with the root cause and treatment B) I try to take advantage of the opportunity to write on this blog to share awareness of GI issues with the public, but most importantly C) there’s a member of my campus ministry that has Crohn’s Disease.  I often don’t see him at our weekly devotionals due to his Crohn’s acting up, I was glad to see him these past few weeks, which means he’s obviously feeling well enough to be in public.  I went to hug him and he grimaced as I pulled away.  I felt bad because I could tell I had accidentally hurt him with my hug.

Of course, my hug was unintentionally painful.  I  had assumed his small stature was due to his inability to keep “food down”, but that was just an assumption and I wanted and needed to know the true story of Crohn’s.

So, as you can imagine this topic is new to me so as I write, I’m learning with you as well!

Specific causes of Crohn’s is not entirely clear, but it has been found that one’s genetics, environment, diet and stress can play a role in the development.  Since Crohn’s Ddisease can impact any part of GIT, the symptoms are few and far between.  However, some common symptoms include: 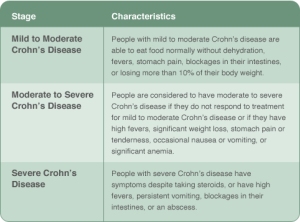 For a complete, thorough diagnosis of Crohn’s Disease, make sure to consult your primary care physician and/or obtain an endoscopy,small intestinal imaging, chromoendoscopy, or biopsy.  In cases of severe circumstances, tears, also known as fissures, in the lining of the anus may cause intense pain and/or bleeding.  Moreover, fistula, which are tunnels that lead from one of intestine to another or connects to bladder, vagina or skin.  If this occurs, it requires immediate medical attention!

As a chronic disease, Crohn’s Disease requires continuous care and understanding that ‘flare ups’ may occur exacerbating some symptoms.  One of the treatment options is to limit the amount of irritation and stress one places on the GIT.  This means adopting a GI Soft Bland Diet may play a critical role in the maintenance and prevention of flare ups! Be on the look out for a follow up post regarding what a GI Soft Bland Diet entails!