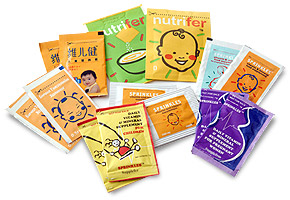 Nearly 300 million children are impacted anemia, with parents finding their children listless and prone to illness.   With damage in the first 1000 days of life to a badly malnourished child is irreversible. In the late 1990s, UNICEF introduced Sprinkles, which were created by Dr. Stanley Zlotkin. Dr. Zlotkin is a professor of pediatrics, nutritional sciences and public health.  Sprinkles is an innovative treatment for the treatment of anemia in children under the age of five, formed of zinc.

Prior to the creation of Sprinkles, the normal treatment was the unpleasant, unflavorful iron supplements via pill or syrup.  Sprinkles is a specially coated, powdered supplement in the form of rice or corn porridge without the untasty flavor.

Regulation of iron absorption is two fold: dietary and store regulator.  There is a short term increase in dietary iron that’s not avidly absorbed and while iron stores increase in liver, hepicidin is released.  Hepcidin is a hepatic peptide that diminishes intestinal mucosal iron ferroportin release.  As body iron stores fall, hepcidin decreases and intestinal mucosa’s signaled to release absorbed iron into circulation.  Dietary citrate and ascorbate from citrus foods can also impact absorption, by forming complexes with iron that increase abruption while tannins found in tea decrease absorption.

The supplements are provided through UNICEF and the Centers for Disease Control and Prevention. The Sprinkles fortified food supplement is provided to those between the ages of six months to two years old and to all pregnant and lactating women.  Those younger than six months are encouraged t be exclusively breast fed in accordance with WHO guidelines for breast feeding. In the past, Sprinkles was delivered in the form of drops, but due to complains of stain to teeth and inability for many parents to “know” how many drops to use due to illiteracy, these supplements are provided in the form of a pap for infant and in drink form for women This is supplement is designed to treat and prevent anemia.  In addition, the amount of vitamin D in Sprinkles is meant to meet the RDI for vitamin D, which in turn is able to prevent rickets.

Additionally, stool color in infants that use Sprinkles are known to change to a dark or black color as iron itself is dark in color.  Sometimes some quantities are left unabsorbed and the iron is excreted in the stool, causing the change in color.

Therefore, due to the positive impact of the Sprinkles implementation into children’s nutrition profile, iron is my favorite micronutrient as it can mean the difference between life or death.  Iron’s mainly absorbed in the duodenum and upper jejunum, with divalent metal transporter 1 (DMT1) facilitating the transfer of iron across epithelial cells.  With the help of ferroportin in the bloodstream, this is released within the enterocyte and is bound in bloodstream by transferrin, a transport glycoprotein.  There is an equal balance of storage and use of iron, with half of absorbed iron put into storage pool in cells, while other half is recycled into erythropoiesis.