Unlike a typical restaurant review, which includes the evaluation of service, ambiance, and/or décor, we’re reviewing restaurants a little bit differently! Sensational Sustenance is redirecting one’s attention to the nutrient content of its menu items! We aim to not only evaluate the flavors in the entrees, but how nutrient rich entrees are in relation to the Dietary Guidelines for Americans using our own proprietary score sheet: Healthy Food Critic’s Ultimate Review Form for Restaurant Entrees. I recently made a trip to TGI Friday’s to check out their dishes!

TGI Friday’s name derives from the expression of TGIF—Thank Goodness It’s Friday, with its chain famous for red striped canopies, brass railings, Tiffany lamps and the use of antiques as décor. In 1965, Alan Stillman opened the first TGI Friday’s in New York. Since then, Friday’s has expanded to over 61 countries and is found ubiquitously in the United States. It advertises itself as a casual dining restaurant chain “…with a festive vibe serving beer, cocktails and a wide menu of American fare.” Without a doubt, they promote their alcoholic drinks, with promo deals plastered everywhere, starting with the entrance and ending in the bathroom.

This past week, I went to Friday’s with a colleague of mine, so you’ll be getting double reviews on this eating establishment! It was interesting to see the difference in experience, as my colleague and I have different food preferences, yet I’m glad I took her with me as I would’ve walked away from Friday’s with a more negative outlook than I did. 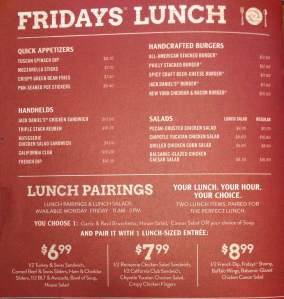 Since my initial run through the Friday’s menu didn’t indicate any “lighter” or “health conscious” menu options, I inquired with the waitress if there were healthier options. She confirmed that there wasn’t a designated healthy section, but directed me to the lunch specials, which are smaller in portions (one is served half of a sandwich) and a great value. Even though there were no nutrient or calorie listings provided on the menu, my colleague chose a House Salad with Bleu Cheese Dressing and a ½ BLT sandwich with avocado. The House Salad was described as “freshly chopped romaine, red cabbage, grape tomato, cucumber, mixed cheese and focaccia croutons with choice of dressing and a hot garlic breadstick.” There was no description of the BLT to compare to the actual dish to be served, but BLTs are pretty self-explanatory.

I opted for the House Salad without dressing and one of the “Handhelds” options, ½ of a California Club, which was described as “Mesquite-smoked turkey breast, apple wood-smoked bacon, ham and Monterey Jack cheese on a freshly baked toasted baguette with freshly chopped romaine, tomatoes, avocado and mayo.” I asked for the mayo to be omitted. 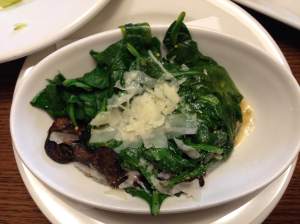 When the dishes came, I was surprised to see it had fries were on the plate. There was no notation next to the lunch dishes that the salads and sandwiches came with fries. Whereas, my colleague was fine with the fries, I didn’t see the harm in asking for a substitution in the fries. The waitress was kind enough to let me substitute fresh spinach for the fries. I was so happy to be able to switch side options as the fresh spinach was a hidden gem! Not only was the spinach sautéed, but it also came with sautéed mushrooms and shaved parmiggiano reggiano!

To limit confusion of dishes, we shall talk about the nutrient content and overall meal experience of my colleague first.

My colleague noted no specific aroma was present in her house salad or her ½ BLT sandwich & Avocado.  My colleague evaluated her overall experience as “liking very much”, as she was provided a generous portion of salad, considered her meal as a great value with the served entrees matching the menu descriptions. Yet, she noted no apparent aroma was present, but that did not alter her dining experience. 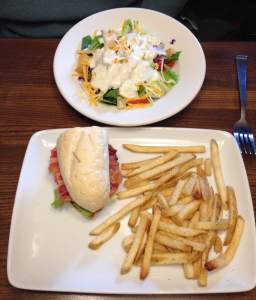 After evaluating the dish, I was able to retrieve further nutrition information on the House Salad with Bleu Cheese Dressing and ½ BLT & Avocado on Friday’s website:

*No breadstick provided with lunch special, which may reduce overall nutrients provided. Since we did not see the size of the breadstick, the nutrient content of the House Salad without the breadstick cannot be positively assessed.

While my colleague filled out a Sensory Evaluation Form on her meal, her overall takeaway of the meal was that she “like[d] the meal very much.” She was provided a generous salad, with a great variety in texture—as she likes crunchy, crispy foods. Yet, the meal was heavy on carbohydrates, with French fries, focaccia croutons and the toasted baguette. Additionally, we were not aware that we were able to substitute French fries for other sides until we requested.

The lunch special was a good value, with the salad alone priced $4.50. In total, her lunch was $6.99, but in further investigation of the nutrient content, Friday’s entrees are not the best “nutrient” deal as it didn’t meet ANY of the Healthy Option Parameters, in fact, exceeding the parameters overwhelmingly!

Now, onto the evaluation of my dishes:

*No breadstick was provided with lunch special

I’m glad I was able to substitute the French Fries that came with the ½ sandwich for Fresh Spinach. Once I requested the substitution, I was told I could replace it with any of the sides—Fresh Broccoli, Ginger-Lime Slaw, Classic Fries, Parmesan Steak Fries, Mashed Potatoes, Sweet Potato Fries, Jasmine Rice Pilaf, Tomato Mozzarella Salad or Cheddar Mac & Cheese. 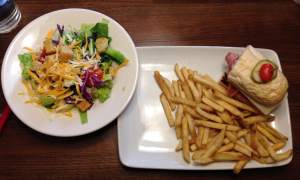 Based on the nutrient content provided on Friday’s website, the Fresh Spinach was 180 calories, 5 g saturated fat; 0 g trans fat; 8 g carbohydrates; 570 g sodium; 4 g protein; 2 g fiber; 14 g total fat, which I find extremely hard to believe. Yes, the spinach had cheese and mushrooms included, but the listing of the spinach as 180 calories has to be error as sautéed spinach is no more than ~70 calories. Perhaps, Friday’s is counting the oil used to cook the spinach, but I have a hard time believing spinach would be close to 200 calories. With that said, if I weren’t able to substitute the Fresh Spinach, I wouldn’t have enjoyed the lunch as much as I did. I found the Fresh Spinach is a hidden gem of the menu!

The sandwich and fries were placed on a dish that was exorbitantly too large for the amount of food served. In relation to healthy portion sizes, the portions met those measurements—with my salad 1.5 cups, sandwich 4.5 inches and the spinach at ½ cup. While the average American might complain the sandwich is “too” small for their liking, the portions do reflect Dietary Guideline options. In addition, the fries appeared to be placed sloppily on the dish. I’m not a fan of crispy, crunchy food and as the bread was toasted, I had a hard time eating the sandwich.

I didn’t have any issues with the amount of spices, seasonings nor the amount of sour, acid and/or brightness of the dish. I found that the dish had a variety of flavors, meeting my flavor preferences.

I wouldn’t necessarily deem the dishes healthy, as the sandwich initially came with French Fries, but since I modified the meal to my food preferences, which I happen to like fresh vegetables, I was able to pick healthier choices.

Again, I was impressed with the Fresh Spinach. The House Salad was a traditional chef salad, with no particular menu development added to the salad. I liked that there were a variety of dressings available, including Avocado vinaigrette and Honey Mustard. I would say I was served a generic dish that I could find in many restaurants. I wouldn’t go out of my way to go to Friday’s for their lunch specials.

I applaud Friday’s portion sizes, but I have to be realistic that we ordered from the lunch menu, willingly ordering ½ sandwiches. Other dishes on the lunch and dinner menus are significantly larger in size than what we ordered, pleasing the average consumer’s plate serving expectations. Friday’s bleakly met a few of the Healthy Options Parameters, exceeding recommended calorie amount, sodium content, total fat and saturated content. I don’t want to sound like I’m touting my own horn, but if I hadn’t swapped out the French fries for the Fresh Spinach, my meal’s nutrient content would not have met the nonstarchy vegetable parameter and my fat intake would have skyrocketed if I had consumed the French fries. One must be an educated consumer to recognize the potential food swaps at Friday’s.  To conclude, Friday’s nutrient content is by no meals up to par with the servings provided.